“On a hot summer day, after getting in a high-end Lexus, I felt a sensation similar to peeing my pants. I looked down and noticed that the seat had little holes, blowing cool air up from below.” It was just another day for Ben Nesvig, who valet-parked cars in Minneapolis for over eight years.

Valets have probably driven more performance cars than any racing driver, and more luxury cars than any chauffeur or financier. They just don’t drive them very fast, or very far. But that’s what makes them interesting; when you take away pure performance, you’re left with the experiences that designers and marketers can actually control. If you’re in the luxe auto business, the guys at the valet stand could be your most important muses.

And in case you’re wondering, yes, they judge every car they park. Here are a few of the things valets taught me about the way they size up the world’s flashest motors. 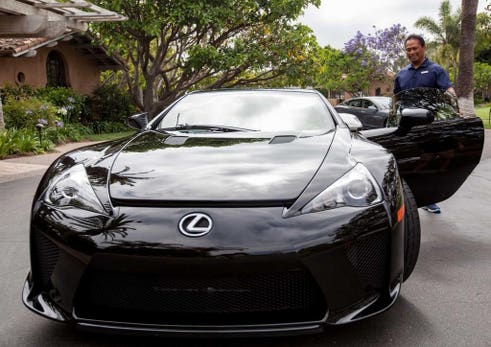 Valets don’t get to experience the top speed of a Ferrari, but then again, neither do most Ferrari owners. Instead, they go by the engine note. “I drive a Lexus LFA on a daily basis,” says Allan Nuguid, head valet at Rancho Valencia Resort & Spa. “It’s tuned by Yamaha and it’s got the best sound. Really mean. I also love Ferraris with custom exhausts, they’re just begging to be stepped on. It’s a little frustrating that we can’t.”

Even the more discreet performance cars are expected to sing a special tune. “There’s a big difference between a Mercedes S550 and an AMG S63,” explains Nuguid. “You know it’s a performance machine from the sound. Our hotel is about a mile from the main road. We can tell most of the models from the sound alone as they come up the driveway.”

Sound means theatrical performance as well. Dustin Acheson is a valet at San Diego’s Grand Del Mar, who talks fondly of parking the monstrous Bugatti Veyron. “When I started it up to drive around the fountain it was incredibly loud like a Formula One car. Everybody turned their heads. Even people sitting inside.”

Silence, on the other hand, can be disconcerting. The first time Dustin parked a Tesla, he found the experience a little stressful. “I wondered if I’d turned it off – there’s no button, no sound. You just walk away and it locks itself.” Other valets have similar complaints about eco-models. “Sometimes I asked myself, ‘Is this car dead, or is it a hybrid?’” says Ben.

2. Materials: you can tell luxury with your eyes shut. 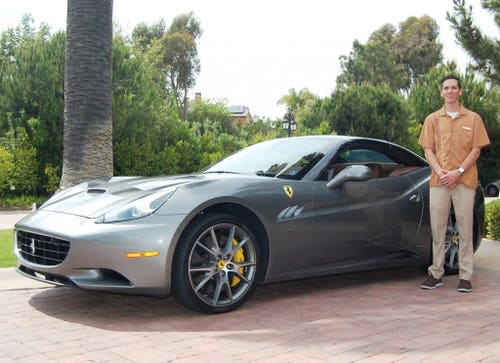 Dustin Acheson with a Ferrari at The Grand Del Mar, San Diego ‘I’m a huge fan of suede’

Dustin says, “I’m seeing a lot of suede in exotic cars right now, Bugattis and Porsches especially. It looks nice and clean, and it’s a lot more grippy on a steering wheel than leather.” All the valets commented on the materials used in the interiors of their favorite cars. The Lexus LFA got a special mention from Dustin, “It looks completely different. It’s all red and black, with lots of carbon fibre. Most performance cars feel like a fighter jet inside. This feels like a spaceship.”

Allan loves the new Ferrari, “The seat fits you like a glove, you can really feel the high-grade leather. The car rumbles when you fire it up. I do it all day and it never gets old.” Bentleys and Rolls Royces come in for special mention. Ben says you always notice the quality of materials: “I never sat in a car seat that’s as comfortable as a Bentley, it really feels formed to your body.”

Your Rolls may be comfortable, but it won’t impress these connoisseurs if it’s completely ‘stock’. The valet’s highest praise is reserved for custom detailing; they’re suckers for beautiful carpets, cross-stitched colored leather and even, in the case of some of Allan’s regulars, hand-stitched seatbelts. 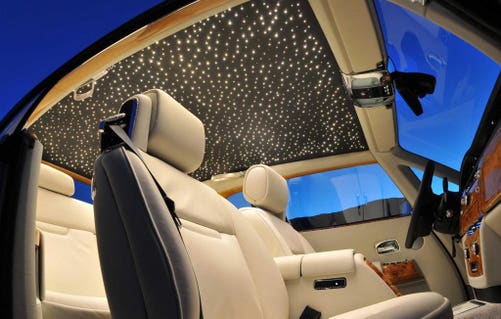 At night, the best luxury cars come alive inside. Dustin talks reverently about the Rolls Royce – some have LED lighting in the ceiling that spreads gentle starlight on the interior. A faint neon-like glow emanates from the recesses of the Rolls Royce’s door handles, setting a gentle ambiance in the cars.

Ferraris, on the other hand, can be a nightmare. The F430 has a single measly ceiling light, leaving the interior in almost total darkness. The stripped-down Porsche GT3 is even worse. Seriously Porsche, how much do a few LEDs weigh? 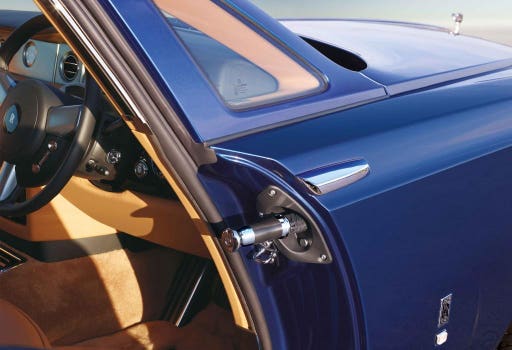 The Rolls Royce Phantom Coupé. Yes, that’s an umbrella in the door.

Like the rest of us, the valets extrapolate a lot about a car from very little. The way the door opens tells them everything they need to know about build quality: “Rolls Royces have great doors,” says Allan. “They’re heavy but smooth, you don’t have to work to close them, and you know when they’ve engaged.” Clever branding makes them pleased to be in a prestige car. To start an Aston Martin, you put the key into the marque badge on the dashboard. The doors of a Rolls Royce Phantom have branded umbrellas built into them.

5. It’s not about the technology

Valets were unimpressed with most technologies – maybe they don’t drive the cars for long enough to appreciate them. But then, how far does your customer drive your new model before they buy it? Technology isn’t what makes these cars special. Sensuality, the feel of a steering wheel, the weight of a clutch, even the smell of the interior all count for far more, even in the stripped-down racing machines.

At Ford, they used to say, “People don’t want innovation. They want leather.” Maybe that’s not true in the mass market. But up in the luxury stratosphere, it’s absolutely the case. It’s not enough to put carbon fiber in your car. Like Lexus in their LFA, you have to make carbon fiber sensual.

All valets have The Conversation. “If you won the lottery, what car would you buy?” I spoke to quite a few pros, and their answers varied, but were almost completely German. The Audi R8 for its performance. BMW’s M3 and M5 for their gimmick-free driving pleasure.

The losers? Anything that’s hard to maneuver. Hummers. The Porsche GT3 RS (stressful to reverse thanks to its ‘whale tail’). And Maseratis, which rattle.

Luxury car valets may not be in the market for a performance car right now. But they may have more to tell luxury car designers about their jobs than their regular customers. That’s why top innovation companies like ours seek out extreme opinions like theirs. After all, how many Ferrari drivers are going to admit that their pride and joy could be improved?

How might the edges of culture inform your innovation strategy?

This article was originally featured on Forbes.